Not So Sexy: The Health Risks of Secret Chemicals in Fragrances

The Campaign for Safe Cosmetics would like to thank the following people for their review of sections of this report: Janet Gray, PhD, Vassar College; Russ Hauser, MD, ScD, MPH, Frederick Lee Hisaw Professor of Reproductive Physiology, Professor of Environmental and Occupational Epidemiology, Harvard School of Public Health and Professor of Obstetrics, Gynecology and Reproductive Biology Harvard Medical School; Ted Schettler, MD, MPH, Science and Environmental Health Network; and Anne C. Steinemann, PhD, Professor of Civil and Environmental Engineering, Professor of Public Affairs, University of Washington. Any errors or omissions in this report are the responsibility of the Campaign for Safe Cosmetics. Support for this project was provided by The As You Sow Foundation, The Jacob and Hilda Blaustein Fund, Johnson Family Foundation and The Richard and Rhoda Goldman Fund. Canadian product testing funding provided by Environmental Defence Canada.

A rose may be a rose. But that rose-like fragrance in your perfume may be something else entirely, concocted from any number of the fragrance industry’s 3,100 stock chemical ingredients, the blend of which is almost always kept hidden from the consumer.

Makers of popular perfumes, colognes and body sprays market their scents with terms like “floral,” “exotic” or “musky,” but they don’t disclose that many scents are actually a complex cocktail of natural essences and synthetic chemicals – often petrochemicals. Laboratory tests commissioned by the Campaign for Safe Cosmetics and analyzed by Environmental Working Group revealed 38 secret chemicals in 17 name-brand fragrance products, topped by American Eagle Seventy Seven with 24, Coco Mademoiselle Chanel with 18, and Britney Spears Curious and Giorgio Armani Acqua Di Gio with 17.
The average fragrance product tested contained 14 secret chemicals not listed on the label. Among them are chemicals associated with hormone disruption and allergic reactions, and many substances that have not been assessed for safety in personal care products. Also in the ranks of undisclosed ingredients are chemicals with troubling hazardous properties or with a propensity to accumulate in human tissues. These include diethyl phthalate, a chemical found in 97 percent of Americans (Silva 2004) and linked to sperm damage in human epidemiological studies (Swan 2008), and musk ketone, a synthetic fragrance ingredient that concentrates in human fat tissue and breast milk (Hutter 2009; Reiner 2007). 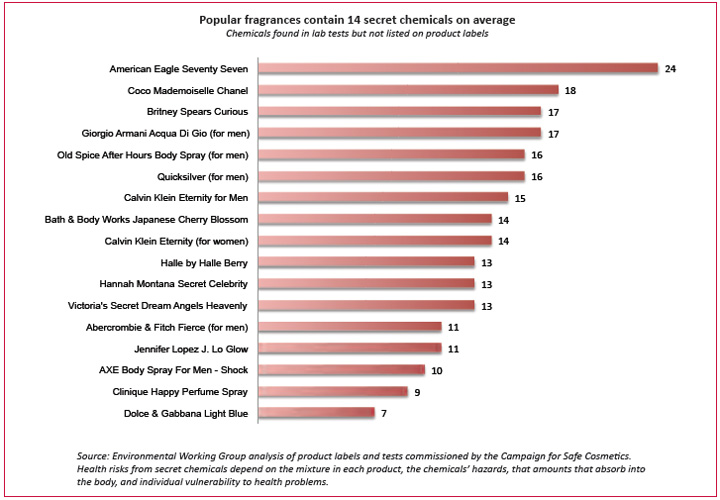